Recall that October 1 is the Independence day celebration for Nigeria. The president is expected to deliver a speech. One expected to reassure Nigerians of what the government can and will do to improve lives. 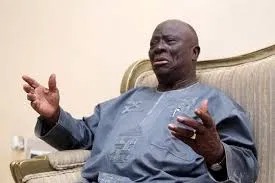 There have been lots of reactions emanating from President’s Buhari’s speech and the bulk of these reactions have not been so Positive. The speech is to commemorate the 60th Independence Anniversary of Nigeria.

Formost Chief and elder statesman, chief Ayo Adebanjo, also made the headlines amongs the so many reactions.

In his opinion, he did not bother listening to the live broadcast. He said he is certain and he knows that Mr. President, Muhammadu Buhari would not have anything to say.

In his own words, He said:

“Mr President does not understand the problem of this country; hence does not have a solution to the problem.

“I didn’t even listen to him at all because I know he won’t say anything.

“You need to understand the problem before you know the theory to be applied.

“If you understand the problem, then you talk about the solution, palliatives and the alternatives.

“Those of us who fought for the independence of the country have not been happy about that it. That is all I have to say.”

Recall, that many reactions emanated from the independent day speech and so many Nigerians even those in the diaspora have expressed dissatisfaction regarding the speech.